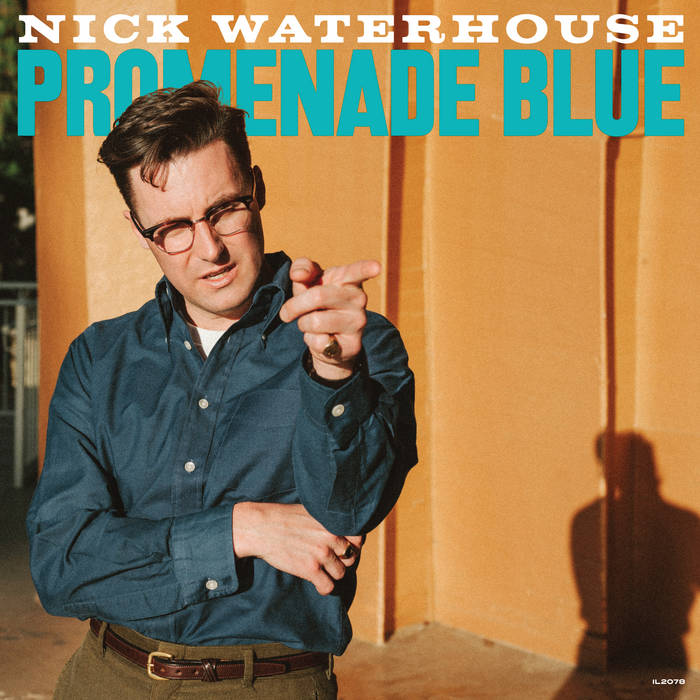 F. Scott Fitzgerald’s The Great Gatsby was a work so filled with ambition, yearning, and inner contradictions that it came to represent the condition of a nation itself. Yet, at its core, the slim novel tells a story about people and, more often than not, their inability to communicate and connect with one another — forever running on parallel tracks until tragedy finally twines them together. The color green (often in the form of the faded sodium lit dock of Daisy Buchanan) comes to represent longing and unrequited love in an era (the Roaring Twenties) of decadence and spiritual vacuousness. Green is Gatsby’s North Star, simultaneously pointing backward and forward through time toward some unattainable, impossibly balanced version of his own life.

Nick Waterhouse, a century later but once again in the ’20s, takes the color blue as his hue of choice on Promenade Blue. In Nick’s musical and lyrical world, blue is a refraction of his life and memories — shadowing a deep, spiritual San Francisco that fostered his musical vocabulary but has now been stamped out irrevocably; evoking the endless tours, marathon recording sessions, and highs and lows of success he’s experienced in his decade-long career; conjuring romances that were doomed, loves that lingered, and hope for future days of parity and partnership; summoning spirits of people who have gone but permeate his mind forever. That’s the world of Promenade Blue — one that is vivid and magnetic, buoyed by both light and density due to Nick’s newfound collaboration with producer Paul Butler (Michael Kiwanuka, Devendra Banhart). It’s not Gatsby’s New York in the 1920s, it’s Waterhouse’s California in the 2020s. Nick makes that crystal clear throughout the record but particularly on “Santa Ana (1986),” where he wryly sings, “Not from New York / And I never was / I’m from California.” With that, he answers all questions about place and setting…but as anyone who’s ever listened to a Waterhouse record knows: time, though clearly pegged to the dawn of this new decade, is a more malleable concept. Where he is is clear. When he is varies.

We can try as hard as we can to make sense of Promenade Blue, but in reality, context isn’t really needed because the music on the album is so damn magnificent. In no uncertain terms, it represents Waterhouse’s finest hour as a writer and bandleader — leveraging the musical partnerships he has built over many years to put something forth that is so fully realized and felt that it sparkles beatifically, reverberating with energy, heart, creativity, and vibe from start to finish. Nowhere is this more evident than on the album’s opening track, “Place Names,” perhaps the most remarkable song in the Waterhouse catalogue.

The tune is a pocket symphony, à la Spector and Wilson, with winding piano lines locking puzzle-like into a whining, weeping string arrangement courtesy of musical blood brother J.B. Flatt. A small cadre of women backing vocalists shout “Never!” and Nick replies “I never cry on cold days / I never mind a trip on the freeway / Because it’s what I know / Never really set for the big change / Learn to let things go / And say blow wind, blow.” The freeways between LA and San Francisco; the memory of spending a teenaged evening in the Vesuvio Café, which looms over the entrance of City Lights Books; the wind ripping through you on a foggy Bay Area morning, cutting into your bones; the pride one takes in his hometown; the distinct life that he has made (or that has made him) — it’s all here in “Place Names” and, honestly, if the album were to end with this one song, Waterhouse would’ve done his service to the 2020s in terms of musical creativity and vitality. Thankfully for listeners, it’s just the beginning.

The album twists and turns from the opening to the close — from swinging, sashaying jazz and blues (“Spanish Look”) to jittering, crystalline doo wop (“Very Blue”) and pure, loose, languid mood music with just a hint of Mulatu Astatke’s Ethiopian modal magic (“Promène Blue”). Most striking, perhaps, is the use of men’s voices as a backing texture, bringing an unexpected thematic unity to many of the songs. Lower-than-low gospel chants and refrains lend both energy and emotional weight to these pieces, conjuring a whole new mythic world for Nick’s compositions. This is a statement album, one to get lost in and rediscover over and over again.

In the Waterhouse catalogue, “Promenade Blue” represents rebirth and reinvigoration as well as a clarity of purpose that elevates it and may one day set it apart as something resembling a magnum opus. It’s his ‘Gatsby’ and it’s also his way of reintroducing himself to a fanbase that has grown by leaps and bounds over the last couple of years. On this record, he paints a mythic picture of his own life — lost in confusion, grating against time, overheated by false memories, being baptized by nostalgia and a vision of the future that is paradoxically both dark and apocalyptic and sparkling with promise. Sounds a lot like America in the 20s to me. Which 20s though? Which color — green or blue? Which author? Try to figure it out for yourself:

“You were smiling at me / Hanging languidly / On your car door window / Very blue / Very green / The ocean breeze / And shuffling trees / Pacific seas.”

“And as I sat there brooding on the old, unknown world, I thought of Gatsby's wonder when he first picked out the green light at the end of Daisy's dock. He had come a long way to this blue lawn and his dream must have seemed so close that he could hardly fail to grasp it. He did not know that it was already behind him, somewhere back in that vast obscurity beyond the city, where the dark fields of the republic rolled on under the night.

Gatsby believed in the green light, the orgastic future that year by year recedes before us. It eluded us then, but that's no matter — tomorrow we will run faster, stretch out our arms farther. . . . And one fine morning——

So, we beat on, boats against the current, borne back ceaselessly into the past.”

Serena Cherry debuts her black metal project, plus a Pick from the Crypt block from Svalbard